Although Chicago’s most popular nickname is the “Windy City,” it is also referred to as the “City by the Lake.” The reference, of course, is to Lake Michigan. Chicago’s economy, lifestyle, and recreation are all very much affected by this massive body of fresh water. Without it, Chicago would not be the economic powerhouse it is today.

Read on to learn about the history of Lake Michigan and what makes this lake so unique.

The name comes from the Ojibwa word for “large lake” – mishigami. Lake Michigan is the only one of the five Great Lakes located entirely within the United States. By volume, it is the second-largest and by surface area, it is the third-largest. The lake’s formation began 1.2 billion years ago when two tectonic plates moving in opposite directions left a giant scar—an event now known as the Midcontinent Rift. Less than 15,000 years ago, melting glaciers filled the giant basin, and Lake Michigan came to be.

The lake’s maximum depth is 925 feet. This is very impressive until you contemplate the mile-thick slab of ice that once covered the area. The lake is 307 miles long, and its shoreline stretches for 1640 miles. 26 of those belong to Chicago, and the Lakefront Trail covers much of that distance. It stretches from Ardmore Street (5800 N) down to 71st Street (7100 S). Hikers, runners, cyclists, and skateboarders all partake in the great lake views and the refreshingly cool lake breezes when heat builds inland.

The lake’s waters impact the city’s residents in myriad ways. They drink it, play on it, and even race on it. They also gaze upon it, savoring the ever-changing light dancing along the surface. In the summer, they watch giant thunderstorms roll out over the lake. In the winter, they may watch lake snow squalls descend upon the city.

Workers tunneled under the lake to connect the crib to the shore. Hand tunneling proceeded at a rate of 15 feet per day. Eventually, nine water cribs would dot the waters off the Chicago shoreline. Two remain active to this day.

Lake Michigan plays an essential role in both domestic and international shipping routes. It is part of a continuous waterway extending all the way to the St. Lawrence Seaway and the Atlantic Ocean. The Port of Chicago handles cargo coming to and bound for distant places like Europe and South America.

Where there’s a big lake, there’s usually sand, and Lake Michigan is no exception. There are more than two dozen free beaches in Chicago. Play beach volleyball or kick back, relax and soak up the sun. Swimming is possible when lifeguards are present.

Chicago offers the largest municipal harbor system in the country. The ten harbors provide space for more than 6,000 boats. The boating season extends from May 1 to October 31. The Race to Mackinac is an annual contest sponsored by the Chicago Yacht Club. Promoters bill it as “the longest annual freshwater sailing race in the world.” The first of the 333-mile races occurred in 1898.

While gazing out at sunlight dancing on the lake’s surface, and it’s all too easy to forget all that happens below. There are 68 fish species located in Lake Michigan. Lake charters help sport fishermen pursue the “big five,” which are chinook salmon, coho salmon, lake trout, steelhead, and brown trout.

Additionally, scuba divers enjoy some of the best wreck diving around Lake Michigan. For example, the Wells Burt is just three miles out from Evanston. The 201-foot schooner sank in 1883 in about 40 feet of water. Cold, freshwater tends to preserve sunken ships far better than saltwater.

As you might imagine, heating and cooling 1,180 cubic miles of Lake Michigan water takes some time. Water temperatures typically lag behind land temperatures. In Chicago, the warmest lake temperatures arrive later in the summer. Those living, working, or playing near the lakefront often enjoy a cooling lake breeze on hot summer days. The warmer air over the land rises, and the heavier, cooler air over the lake rushes in. 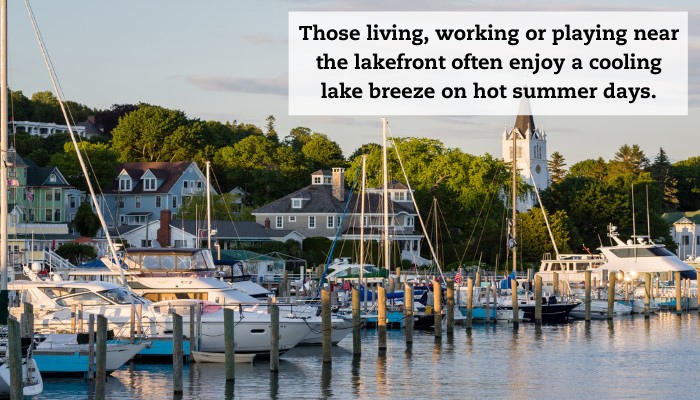 Looking for vintage charm along the lakefront? 1420 North Lake Shore is a boutique-style luxury residence on Chicago’s magnificent Gold Coast. After a busy day around the city, kick back and relax on the rooftop terrace. 1350 North Lake Shore is another popular place to live on the Gold Coast. The rooftop deck offers panoramic views of the lake. It is steps from world-class dining, shopping, and entertainment.

Eleven Thirty is an amenity-rich luxury apartment building in the South Loop. Choose from units with lake and/or city views. Select residences offer sweeping Lake Michigan views. Relax poolside on the south pool deck. You’ll also find the newly constructed Aspire Residences in the South Loop, a little more than a half-mile from the lake.

To learn more about these and other luxury properties from Draper and Kramer, please contact us today.

Lake Michigan is the only one of the five Great Lakes located entirely within the United States. By volume, it is the second-largest and by surface area, it is the third-largest.

What People Who Work From Home Want From Their Apartments

10 Must-Have Pet Products for Your Apartment