Why People Are Flocking to the “The Friendly Confines” of Wrigleyville

Cubs legend Ernie Banks is credited for giving Wrigley Field the iconic nickname, “The Friendly Confines.” Today, the same can be said of Wrigleyville, a neighborhood on Chicago’s North Side that surrounds the iconic stadium.

Read on to learn more about this lively neighborhood and why people are choosing to make Wrigleyville their home.

The Origins of Wrigley Field

There would be no Wrigleyville without Wrigley Field. The story of Wrigley Field starts with William Wrigley Jr. and his namesake company which dates back to the 1890s. It all began not with chewing gum, but with soap and baking soda. The gum was a freebie included with the company’s primary products. Not surprisingly, Wrigley’s gum proved way more popular with the company’s loyal following. Ultimately, the chewing gum tycoon would give Chicago two unforgettable landmarks. One is the 425-foot Wrigley Building and the other, Wrigley Field. Wrigley purchased the Cubs in 1921, and their home park took the owner’s name six years later.

Today, Wrigley Field is an intimate venue beloved by Cubs fans. Among major league ballparks, only Boston’s Fenway Park is older. Ticket holders love the ivy-covered brick wall in the outfield and the iconic marquee above the main entrance.

There’s more to Wrigleyville than baseball. The neighborhood is home to several highly-regarded restaurants and cultural institutions.

Smoke Daddy Wrigleyville (3636 N. Clark) is in the Hotel Zachary. In 1994, Smoke Daddy first served up its BBQ and live music in Wicker Park. Over the next quarter-century, major publications like Zagat and the New York Times rated its BBQ the best in the city.

Murphy’s Bleachers (3655 N. Sheffield) has long been a favored gathering place for fans. Relax on the sunny patio or celebrate a big win after the game. The Brickhouse Tavern (3647 N. Clark) pays homage to the late Cubs broadcaster Jack Brickhouse. This is a sprawling sports bar with four levels and two outdoor terraces. Try memorable treats like a lamb chop served lollipop style or buffalo chicken in a waffle cone.

Other neighborhood attractions include the Newport Theater. It is a 125-seat venue for comedy, variety shows, and burlesque. You’ll find Lucky Strike at the intersection of Addison and Clark streets, which offers an eclectic mix of art, music, games, food, and entertainment across 30,000 square feet of space. Finally, it is always fun to browse the many baseball-related gift shops along Clark, Addison, and Sheffield streets. 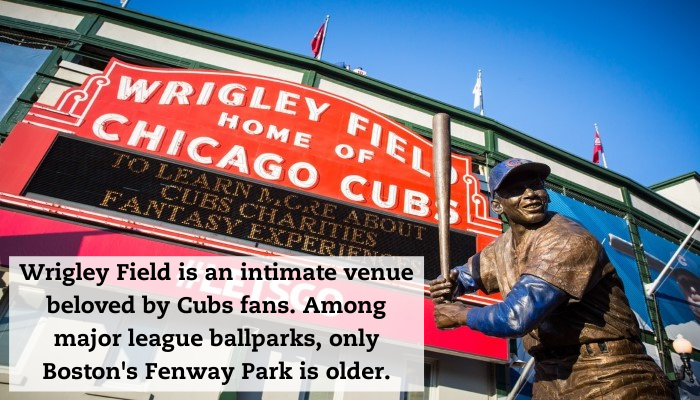 Lincoln Park is just to the east of Wrigleyville. This sprawling expanse of green space is home to the Lincoln Park Zoo, Belmont Harbor, and the nine-hole Marovitz Golf Course. Steps from the golf course are the Waveland Park tennis courts and the Bill Jarvis Migratory Bird Sanctuary. To the north of Lincoln Park is Montrose Beach, where visitors can enjoy swimming and kiteboarding. There’s also a dog park, observation area, and a bird sanctuary.

Wrigleyville is located near many renowned schools. DePaul University (2400 N. Sheffield) is less than two miles south of Wrigleyville. Loyola University (1032 W. Sheridan Road) is four miles due north of the neighborhood.

Northside College Prep (5501 N. Kedzie) is a top-rated magnet high school. It is less than five miles northwest of Wrigleyville. Math and reading proficiency rates are 94 and 97 percent, respectively. Northside Catholic Academy (6216 N. Glenwood) is four miles north of Wrigleyville. It is one of 50 private “Blue Ribbon” schools in the country.

Clark Street runs from southeast to northwest through the heart of Wrigleyville. Irving Park Road and Addison Street are major east-west thoroughfares. Motorists living in Wrigleyville enjoy easy access to Lake Shore Drive (U.S. 41) less than a mile to the east. I-90/94 lies just to the west.

Residents also enjoy excellent mass transit options. The Chicago Transit Authority (CTA) Red Line serves the neighborhood and its Addison Station is less than a half-mile from Wrigley Field. The Red Line whisks residents to the Loop in 15-20 minutes. CTA bus routes 152, 22, and 8 are among those that also serve the area.

The neighborhood is home to Wrigleyville Lofts, a new mixed-use development at 949 West Dakin. Street-level businesses include Lakeview Ace Hardware and a coffee shop, where residents can sip coffee at the counter while checking their train status on a CTA transit video monitor. There are more than 100 one- and two-bedroom industrial-style lofts. Wrigley Field is just two and a half blocks to the south. Residents also enjoy ready access to Wrigleyville’s vibrant dining and bar scene.

Relax on a rooftop deck offering views of Lake Michigan and Wrigley Field. Enjoy the fire pits or prepare a meal at one of the grilling stations. There’s also a fully-equipped fitness center and heated bike room, among other amenities. Along with easy access to Cubs games, residents of Wrigleyville enjoy tree-lined residential streets, vibrant dining, and nightlife. Consider Clark Street and its sports bars, for example. The neighborhood attracts young professionals, dedicated Cubs fans, college students, and many others.

7 Tips for Setting Up Your Perfect Gamer Space